As a proud geek, I often wonder where we will be in the future in terms of the tech we have. A friend of mine just purchased a new MacBook Air, lucky bastard. It is light, thin and powerful. By comparison my 3 year old MacBook looks light years away.

Looking at Jonny Ive’s design (that all the ultra book manufacturers copied) I struggle to see where they can improve. Yes I’m sure they will get quicker and storage will grow (or become cloud based) the screens on all Apples machines will be retina displays but aside from that.

The keyboard on the Air is full size, a thing of which apple are proud, it makes the air easy to operate. So I can’t see them going smaller, nor can I see them doing away with the physical keyboard. Although currently I am typing this on my iPhone, the virtualised keyboards of iDevices don’t make for good long term typing options. The screens will not get smaller, for we need to see what we are doing. Google have their goggles, which incorporate a display onto glasses but again how comfortable will that be for long term use.

It’s not just hardware I ponder. Software too, games, graphics, operating systems. Microsoft have gone down the touch screen route for their latest version of Windows. Some operations easier to perform with a finger on the end of a cramped hand on the end of a achey arm. Than with a traditional mouse, but touch screens don’t work, thanks for playing. One division of Microsoft who has got it right is the Xbox. Their motion controlled gaming system Kinect, is truly revolutionary. I hate it, because you can’t use it sat down, but the tech behind it is amazing.

Couple this with the advances in graphics and its now increasingly the case that games look very real and you are performing real actions. Fast forward generations into the future and in Grand Theft Auto 8 you will be stabbing a very real looking prostitute in the face. All boyish prevado aside (y’know the inner 9 year old who says “that will be cool”) will that be fun? Really? If nothing else it will give the “video games cause serial killings” people serious ammunition.

Additionally no-one could have predicted how the smart phone has revolutionised our lives. I used to feel anxious when I mislaid my Nokia 3210, when I mislay my iPhone I go batshit mental. Now I would be lost without it. Everything is on this mixture of aluminium and glass. Who knows what they will do? If it will in the long term enrich our lifes or just extend the control these screens have on our increasingly Orwellian existence.

Since the Keynote speech, MacBoy has been excited for the release of Mac OS 10.7 known to his friends as Lion. Been doing a little Google Fu and the only reviews I have found thus far have been for lucky buggers who own recent Macs. I however own a late 2009 MacBook, relatively new, but old enough to be worn in and not have a fancy multitouch trackpad. How does that effect the user experience in Lion?

Well.. Lion is touch enabled, borrowing much from the iPad/iPhone operating system iOs. To scroll down a page, any page you hold two fingers on the trackpad and move up, yes Apple moving up to go down. Now my Apple brothers with more recent machines with full multitouch options have the ability to turn this off, and move down to scroll down, as it’s been since god was in short trousers. I however do not, or if I do I have yet to find it. So up to go down is the way forward.

My MacBook has the minimum spec required for Lion. Before install I was worried about this, coming from the Windows side of things I have learnt that minimum specs aren’t to be listened to. On a PC a minimum spec means, can you turn it on and wait until next week to work. Install of Lion took about 40 mins, and I think it’s added a few seconds to boot up but that is the only slow down I’ve noticed. Yes if you filled up all the different desktop spaces with Final Cut re-rendering Titanic there would probably be some beach ball action, but as I don’t intend doing that anytime soon. It’s all good.

Navigation in Lion is all about Space, freedom to set up your work/leisure environment how you want it. Several apps can run in full screen, nothing to distract you, for instance I am writing this in Safari in full screen mode. To go do something else, those with a fancy trackpad can swipe across with 3 fingers and go do whatever, but what can I do. Well  Control and a arrow key, not as fancy but it works. 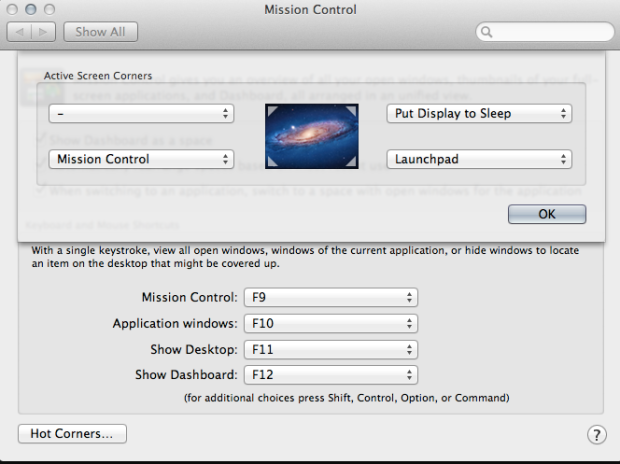 Yes folks, Hot Corners. bottom left launches Mission Control, bottom right launches LaunchPad. The low tech mouse gesture. With a few moderations Lion can be fully enjoyed without multitouch. Although I’m bordering on Fanboi status, at £20.99 everyone who can should.

Other pluses and minuses can be found elsewhere, but briefly:

Takes a little while to get used to, but I am Lion, hear me roar!

This was back in the day when I wasn’t too tech savvy, having recently transferred to the PC from an Acorn Archimedes, so down to the local tech guys, who formatted my drive and charged me through the nose. Virus removed. Fast forward  15 or so years. Malware hits the Mac in the form of Mac Defender/Guard, not a virus but pretty close, a week later Apple release a security patch, killing the threat. Oh look how far we’ve come, vendors of the operating system now provide patches for viruses and computing is now hassle free, Apple and Microsoft must be commended by for their swift action.. no wait sorry.. apparently the PC variant of Mac Defender and millions of other security threats remain un-patched. Oops.

Microsoft famously in fact have taken 7 years to patch a known vulnerability in their software. 7 years! Now because Microsoft do not make computer hardware, it is unreasonable of anyone to expect them to patch for viruses, because each PC on which it’s software runs is different, but to not patch their own software for 7 years! That is a middle finger to all their customers surely.

People have said the reason why the mac has no in the wild viruses is directly linked to it’s market share. 90% of world use a Microsoft OS. 10% Macs. This is true, partly. Mac OS is built upon UNIX and according to folks more geeky than I, that means it’s more difficult to produce a successful virus. If this recent malware scare has taught virus developers anything it’s surely don’t dick with Apple. You make it, we’ll patch it. There is sure to be a little backlash, with the malware developers changing things, but as Apple announce Mac OS 10.7 Lion I’m backing cupertino.

With smartphones, there is debate about Googles openness in the form of Android Market vs Apples walled garden App Store. Obviously I’m going to favour the garden. All Apps validated by Apple, controlling yes, money making yes, consistent  you bet ya, screw up your phone no freaking way!

Android Market is riddled with Malware Google are removing apps but the open way in which everything has been done means they are always a few steps behind, so on Android your data could be half way round the world before Google have even had a chance to not be evil.

“It is easier for me to leave my car unlocked with the keys in the ignition ready to go. I don’t because it is insecure.” So if in the future all apps are brought via Apples App store or a Microsoft equivalent and all these apps are validated, we sacrifice a the ease of free choice safe in the knowledge that all the personal stuff we have on our machines is safe. The debate goes on..